In 1917 behind Waterloo Station in London, George Burchett was doing a roaring trade. He had been practising his craft since he was a small child, reportedly expelled from school at the age of 12 as a result. At the turn of the century, he began working in the East End of town. The docklands provided the perfect place to hone his skills – sailors historically being keen collectors of his work. His reputation grew and the outbreak of The Great War saw an explosion in people seeking his skills. In time, George Burchett would become known as the King of Tattooists.

Tattooing is one of the oldest art forms, rooted in tribal culture – Julius Caesar wrote of the Celts and Picts decorating themselves with war-inspired designs of black or dark blue woad way back in 54BC. This primitive urge to carry with you in battle a symbol of what you fight for, or your people, is one which found a great resurgence during The Great War, ‘as if to show that war is essentially primitive’ as Margaret Chute writing in The Graphic in 1917 put it.

An article in the Wigan Advertiser from 1915 tells of the phrase ‘Avenge Belgium’ emblazoned in red, white and blue, being a popular choice among soldiers due to leave for the front. Regimental badges, designs including the national flags of the Allied nations and portraits of the King grew in popularity as the trend for tattooing spread from Jack to Tommy.

As the war progressed, George’s client base grew with not just soldiers bound for the front queuing for his art, but their sweethearts and even royalty – including George V. Burchett explains in a 1917 interview that a lot of his pre-war days were spent undertaking cosmetic tattooing for Lady’s of the Aristocracy – rouged cheeks being all the rage – or decorating the arms of ‘blue bloodied’ gentleman with family crests and monograms. It was estimated that as many as one in five members of the gentry were tattooed at the turn of the century but the war opened tattooing up to the masses…

It’s a busy life now – one long rush; but the customers chiefly wear khaki or blue – except a few ladies, who come to have “his” regimental badge put on their arm for keeps

Of all the documented work George completed, there is one story in particular that stands out. The case of a soldier bound for the front, bringing his 9 year old daughter in to have a shamrock and a thistle inked on each arm. She did not wince or cry and was ‘proud as punch’ when it was finished because ‘Daddy wanted it done’. An incredible story, in which I see an anxious Father, battling to say goodbye to his daughter. Perhaps wanting to leave a visible mark and a piece of himself with her for all time, in fear that he may never return from the war.

After the war, many soldiers came back for tattoos of a different kind – to commemorate and remember the losses and strife of conflict. Bulldogs, Union Flags and Lions along with names of comrades and regimental insignia were all popular. It is in this vein that I have had two pieces completed myself, a poppy and most recently, the Menin Gate Lion.

Though not to everyone’s taste, there is something deeply spiritual about getting a tattoo which holds a special meaning to you. The process of enduring pain, often for hours, to result in a link of true and tangible permanence is something which cannot be easily explained. It must surely have been a cathartic undertaking for the men returned, as they attempted to process their experiences and grief. 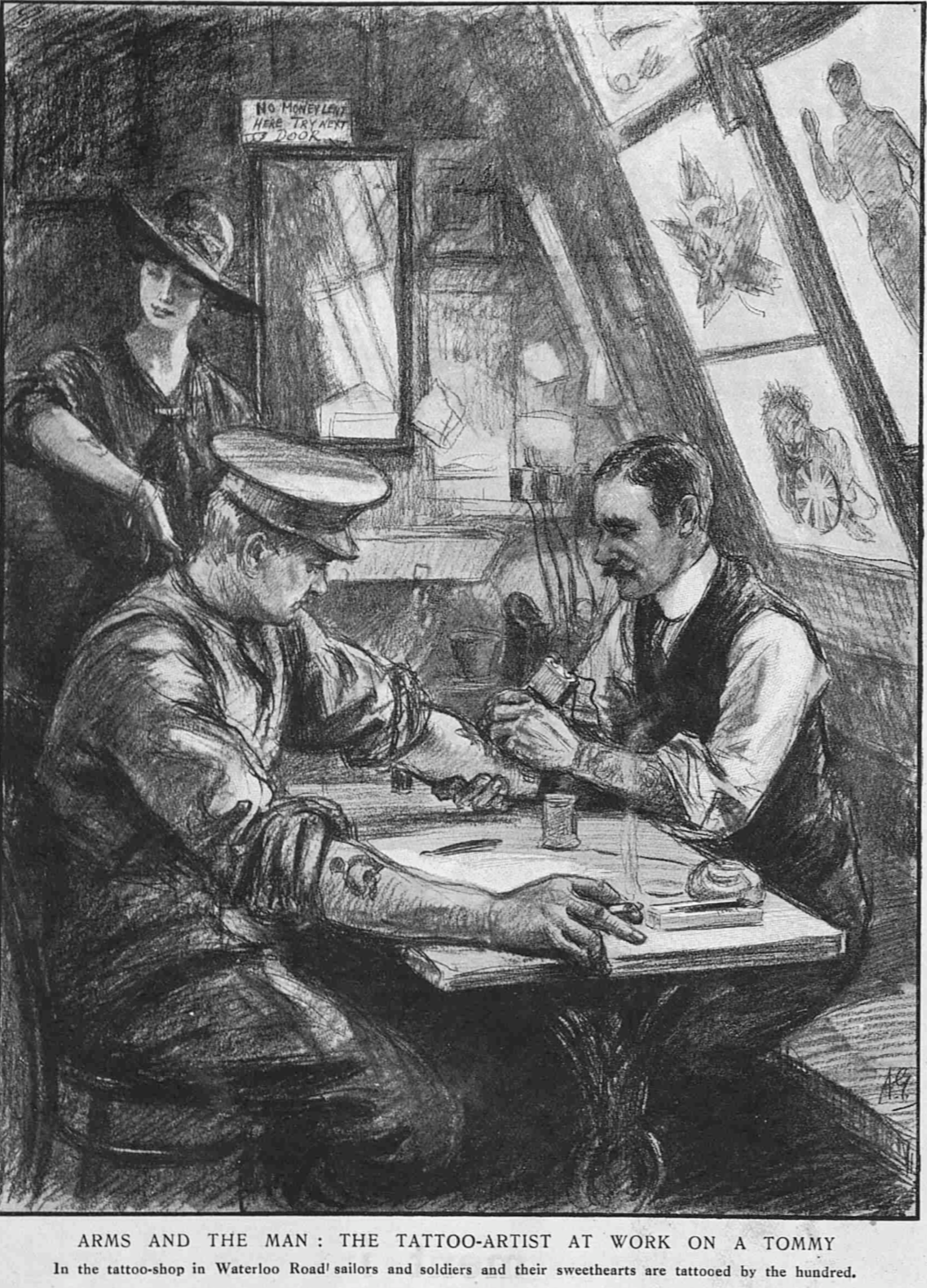